ABSTRACT PHOTOGRAPHY
FROM THE AVANT-GARDE TO THE DIGITAL AGE 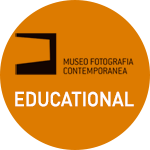 THE SIXTIES AND SEVENTIES: THE BODY AS LANGUAGE