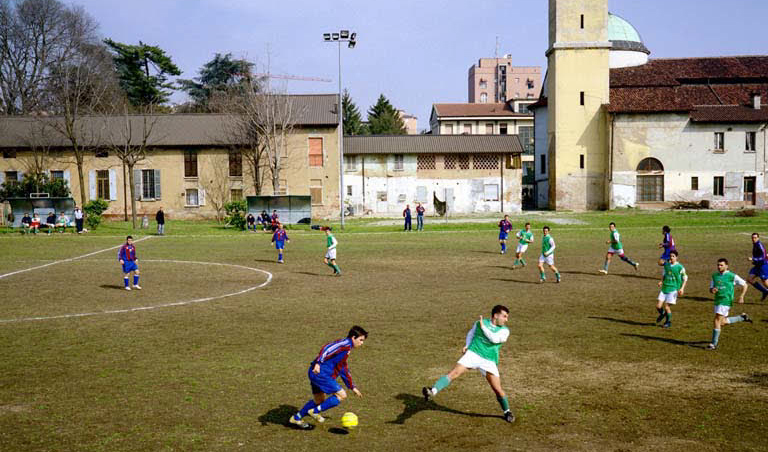 European Fields Unlocked
Football as a window into human behaviour

No amateur football, no professional football, no Champions League, no UEFA Euro 2020, no champions this year. For over a century, football has brought people together. Now, ‘The Most Important Side Issue in Life’ has come to a grinding standstill…

Ever heard of European Fields by Hans van der Meer? It was a book as well as a travelling exhibition, showing the true spirit of the game: twenty-two players on a pitch, no matter their talent, no matter where. Passionately playing together, in a setting far away from the Champions League. Van Der Meer’s observations of life at the bottom of the football pyramid show not only how football is part of the landscape, but also how deeply the game and its rituals are rooted in human culture. With mild irony Hans van der Meer demonstrates the mismatch between human ambition and the effective result, between an individual’s ‘inside’ perception and a more objective, distanced view of our behaviour. Amateur football as the perfect metaphor for life at large.

The European Fields travelling exhibition not only contained his photographic football landscapes, but also a number of movies. Or should we rather call them video observations? These were shot across Europe: from Belgium to the UK, Portugal, France and Italy. As part of the cultural programme surrounding Euro 2000, the first one Vlaamse velden (Flemish Fields,), dates back to exactly 20 years ago.
Calciatori della domenica (Sunday football players),  shot in and around Milan, was commissioned by the Museum in 2006.

In these days of social distancing, Paradox and 5 european partners, ranging from the world of football as well as the arts, wish to share these demonstrations of being together, playing together, living together with you. Not all at the same time of course: we will be launching five ‘matches of the week’ on consecutive weekends, starting May 8 on YouTube Paradox & Hans van der Meer channel.

Hans van der Meer (Leimuiden, The Netherlands, 1955) has been active since the early 1980s. After doing social reportage on urban behavior and the world of work, in 1995 he undertook a project about football. He is on the editorial staff of Useful Photography, a magazine that investigates the aesthetic value of commonly used imagery (e.g. photographs for catalogs, instruction manuals, packaging…)

It’s a man re-chalking the lines on the pitch in the shadow of a block of flats, or along a row of poplars, or behind an old farmhouse, looking onto the mountains or perhaps onto an industrial warehouse.
It’s a bench that only a few can sit on while the others all have to stand.
It’s a white-haired ref trotting around with a colourful T-shirt which fails to hide his belly, clearly waiting for lunchtime to roll around.
It’s the kick-off whistle.
It’s a linesman with his coat on, standing around midfield with his flag down; it’s a spectator reading the paper, four pensioners each with a walking stick, a farmer in the distance who looks up and stops what he’s doing for a moment.
It’s an imprecation.
It’s a dad with a pushchair, a distracted wife, a worried girlfriend, a bored mother.
It’s a shout repeated: come on! come on! come on! It’s a substitute warming up and who never gets put on.
It’s a statue of the Virgin Mary, perplexedly listening to some mumbled swearing while she looks on at a toe-punted pass as the bells chime the hour. It’s the search for a ball lost down the bottom of a ditch.
It’s a trainer at the end of his tether, a striker protesting, a ref explaining everything angrily because he blew his whistle although nobody is very convinced. It’s a cry rising from the terraces: change job!
It’s time passing and the match ending.
It’s washing shoes in the wash basin and the man who takes away the corner flags because it’s always best not to leave them there, you never know, someone might come along and take them away and we’d only have to buy them again.
Sunday football is a match played on grass or mud, on beaten ground or in the midst of scratchy gravel. It’s green or grey. It might be sunny or it might be very cold. Sunday football is life.