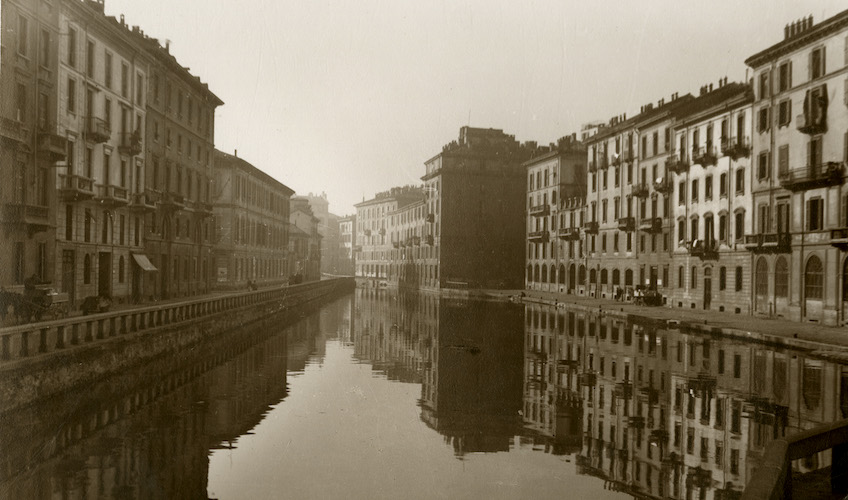 The exhibit presents a special selection of photographs by important Italian authors, taken from the late twenties to the end of the twentieth century and depicting the richness and variety of the Milanese urban landscape and of the vast and productive territory that surrounds the city, significantly marked by the many canals that flow through it.

It is subdivided into three groups of photographs, reproduced on the occasion of this exhibition.

The oldest ones, dating back to the twenties and thirties, were taken from precious photo albums kept at the Milan Municipal Photographic Archives and show familiar parts of the city, characterized by the Navigli and smaller canals, bridges, barges and people living and working in close contact with the water: Milan was a city on the water, in fact, fascinating and surprising, totally unlike the city it is today.

The Municipal Photographic Archives also provided the images shot by Paolo Monti (from the Archivio Paolo Monti, on deposit, owned by the BEIC, Biblioteca Europea d’Informazione e Cultura Foundation), one of the acknowledged masters of twentieth century Italian photography, who in the fifties devoted numerous series of photographs to the Darsena and the Milanese Navigli, in an extensive examination of their structure and relationship with the urban context.

The third part of the exhibit groups together a series of images by prominent figures in contemporary Italian photography: Olivo Barbieri, Gabriele Basilico, Gianni Berengo Gardin, Vincenzo Castella, Guido Guidi, Mimmo Jodice, Toni Nicolini and Francesco Radino. Among with other photographers, in the decade between 1987 and 1997 they participated in the famous project known as Archivio dello spazio (Archives of space), the photographic aspect of the project involving Architectural and Environmental Assets of the Province of Milan, which provided a collective view of the complex relationship between historical architecture and the industrial and post-industrial landscape in the provincial areas surrounding Milan. In this context, the presence of the canals, which flow alongside fields and former factories, is of fundamental importance. The Archives of space photographs are part of the collections of the Museum of Contemporary Photography.

It’s the first public museum of photography in Italy. The mission is the conservation, cataloguing, study and promotion of photography, with a particular focus on the relationship between photography and other arts and the current technological transformations.
OPENING TIME
MUSEO
wednesday, thursday, friday 4.00-7.00 p.m.
saturday, sunday 10.00 a.m.-7.00 p.m.

This website uses cookies to improve your experience while you navigate through the website. Out of these, the cookies that are categorized as necessary are stored on your browser as they are essential for the working of basic functionalities of the website. We also use third-party cookies that help us analyze and understand how you use this website. These cookies will be stored in your browser only with your consent. You also have the option to opt-out of these cookies. But opting out of some of these cookies may affect your browsing experience.
Necessary Always Enabled

Any cookies that may not be particularly necessary for the website to function and is used specifically to collect user personal data via analytics, ads, other embedded contents are termed as non-necessary cookies. It is mandatory to procure user consent prior to running these cookies on your website.