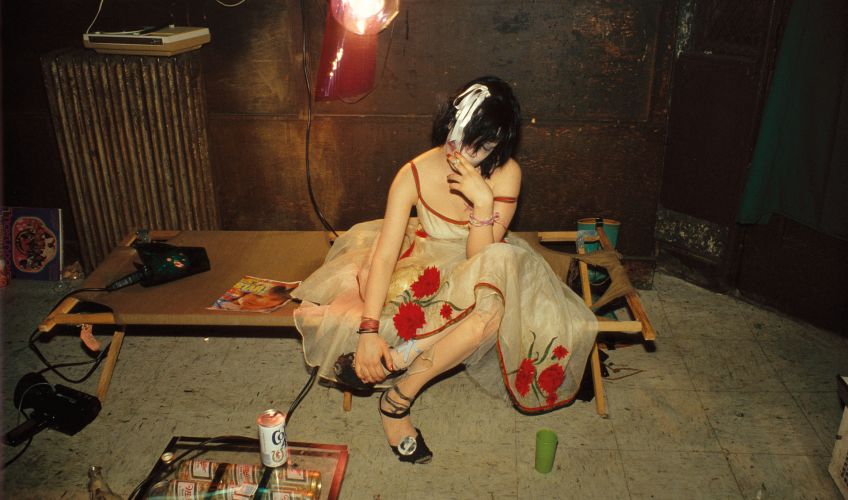 The Museum of Contemporary Photography presents The Ballad of Sexual Dependency by the American photographer Nan Goldin (Washington, 1953), curated by François Hébel. First exhibited in 1986 at the Festival of Arles and recently revived at MoMA in New York in early 2017, the opus comes to Italy for the first time at the Triennale di Milano, from 19 September to 26 November 2017.

Ballad is the most famous and successful work by Nan Goldin (b. Washington DC, 1953): a work in progress begun in the early ‘80s and then continually expanded and updated, which today is recognized as one of the masterpieces of the history of photography.

It is an immersive work consisting of around 700 color images in a filmic sequence that lasts approximately 42 minutes and is accompanied by a soundtrack that ranges from punk to opera. A visual diary, at once autobiographical and universal, intimate and communal, about the fragility of human beings and the constant tension between individuality and the need to relate to others. A sequence of images that deals with life, sex, transgression, drugs, friendship and solitude.

Nan Goldin’s gaze embraces every moment of her daily life and experience. The artist photographs herself and the troubled lives of her cohorts in downtown Boston and New York in the ’70s and’ 80s. Her photography is instinctive, unconcerned with the beauty of form, which pushes beyond appearances towards the deep intensity of real situations, without any mediation. In a total fusion of artistic evolution and her own painful yet fascinating life story, Nan Goldin created a genre unto itself: studied, utilized and imitated throughout the world, her images are a model that remains intact today.

Also straddling the line between real life and artistic enquiry is the public persona of Nan Goldin, among the undisputed stars of international photography. Her visual language has conquered both the world of art and that of fashion, such that her images appear on the covers of major magazines and in the ad campaigns of the biggest brands of clothing, fragrances and accessories.

The installation consists of an amphitheater in which the audience can view the work and a video that is projected once per hour, preceded by an introduction and followed by an exhibition of printed materials and original posters from Goldin’s earliest performances in the pubs of New York City.

The Milan show will be accompanied during the month of November by an exclusive concert by the Tiger Lillies at the Teatro dell’Arte. In addition to their own musical repertoire, the British trio will do a live performance of the soundtrack of Ballad.

Nancy Goldin was born in Washington DC in 1953 to middle-class Jewish parents. She grew up in Boston, where she attended the School of the Museum of Fine Arts and began frequenting the underground world of nightclubs.
At the end of the 1970s, she moved to New York to devote herself to photography and experimentation, drawing inspiration from her life and from the underground urban subculture in which she was immersed, including sex, alcohol and drugs.
From the second half of the 1980s, after the death of numerous friends, Goldin decided to dedicate herself completely to art. She moved to Europe, living in Berlin and working in Naples, and began traveling a lot between West and East, e.g. Bangkok, Manila, and Tokyo. She collaborated with numerous well-known artists, published several books and exhibited her works in major museums around the world.
In 1996, the Whitney Museum in New York did the first major retrospective, I’ll Be Your Mirror, about Goldin’s direct gaze as a mirror of society.
Nan Goldin has won numerous awards for both film and photography, and has received important commissions, including from the Musée du Louvre.