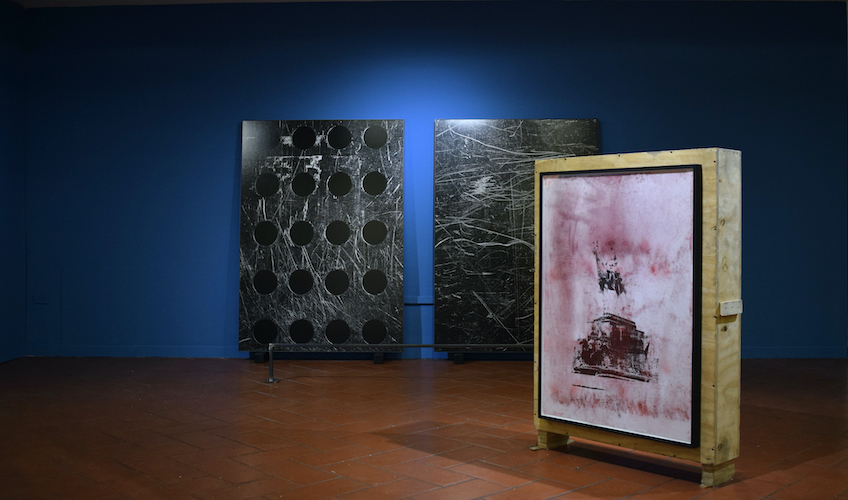 SHIELDS by Paolo Ciregia SNORKELING by Cosimo Veneziano
A symbolic and formal reflection on the idea of conflict and the complexity of history, an appeal for peace.

From Wednesday 16 March 2022 MUFOCO  is presenting a special dialogue between the works entitled Shields by Paolo Ciregia and Snorkeling by Cosimo Veneziano in the entrance hall of the Museum, Both of these works were created in recent years.

In an historic moment of extreme tension in which the shadow of war once again projects itself over Europe, Museo di Fotografia Contemporanea is with conviction affirming the values of art and culture as the instruments of knowledge, awareness, confrontation and peace. On the both formal and symbolic levels the dialogue between the works intends to give rise to a profound reflection with regard to the idea of conflict and to the complexity of history.

Paolo Ciregia was born in Viareggio in 1987. After having worked for a number of years as a photojournalist in various theatres of war he has dedicated himself to a work of artistic research which in using various forms of languages investigates geopolitical themes, power systems and some aspects of twentieth century ideologies that are once again presenting themselves in our society.

The work entitled Shields of 2018, part of the Museum’s collections, is made up of two images that record the ‘wounds’ inflicted on both sides involved in the Russia-Ukraine war of 2014 during which the artist followed the developments starting out from the capital to finally arrive in the Eastern part of the country – in Donbass, Doneck and Mariupol.

The subject of the images derives from the digital scansion of a small portion of a riot shield of the Ukrainian police ‘taken’ by the demonstrators during the clashes and later used against the same police. On its surface we consequently find the impressed signs of the battle by way of a series of scratches, lacerations and other marks, ‘scars’ as the memories of both sides of the conflict. A chaos of signs that becomes an image and which appears as an abstract composition, printed on a large scale in order to allow the spectator to come to form part of the pathos of those events. It is the object in its own right that becomes the ocular testimony of the struggle, the shroud of the revolution’s wounds. The title of the series of which the works form part – 125 – refers to the number of people who died during those days of conflict.

The work entitled Snorkeling of 2019 by Cosimo Veneziano, born in Moncalieri (Turin) in 1983, starts out from the wish to investigate the ambiguity of the idea of ‘the monument’ in relation to the political and cultural upheavals of history. The work is made up of two ‘tensioned’ images, two silk-screen reproduced statues on which the artist has manually worked by partially veiling and hiding the profiles with layers of red and yellow pigment.

The artist ‘approached’ the first monument by following in the footsteps of a fellow countryman, the Piedmontese sculptor and composer Pietro Canonica (1869-1959) who had been charged to carry out the statue of Zar Nikolaj Nikolaevič Romanov that in 1912 was placed in Manejnaja Square in St. Petersburg (to later be destroyed in 1917 during the revolution).

The second was a monument to Lenin erected in Kiev and now removed. With a height of more than three metres the statue was created in order to be presented in the Soviet Pavilion at the New York World’s Fair in 1939. It was sculpted by Sergey Merkurov who had made the plaster cast of Lenin’s face on the night he died in 1924. In 1946 the monument was moved to Kiev, at the time the only capital city of a Soviet Republic that did not possess one.

The statue of Lenin survived the downfall of the Soviet Union and was only removed in 2015 as the result of the protest movement known as Euromaidan.

Snorkeling was created in Kiev in collaboration with Radius and is part of Biomega Multiverso, an extensive interdisciplinary work treating the models of vision in contemporary society. The project, winner of the 2019 Italian Council, is now part of the Museum’s collections.