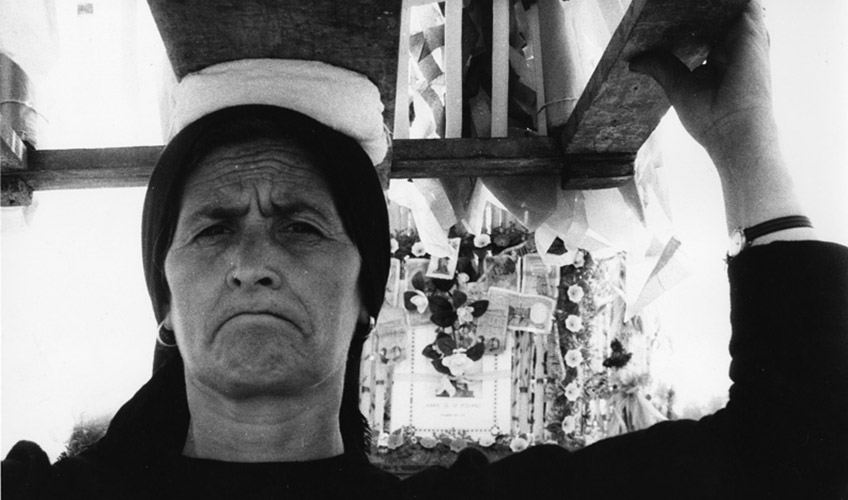 from the collections of the Museum of Contemporary Photography

This exhibit presents 120 photographs taken by 15 important Italian photographers of the twentieth century, whose subject is the South of Italy, a theme very well represented in the collections of the Museum of Contemporary Photography. In fact, the story of the society and environment of the South was the subject of fundamental social reportages signed by recognized masters of Italian photo journalism, as well as more purely artistic studies that made important contributions to the history of Italian photography.

The images, taken in Calabria, Campania, Puglia, Basilicata, Sicily and Sardinia, are grouped in 16 different subject categories. They cover a period of fifty years, from just after WW II to the early nineties, and touch on topics profoundly linked to the economic and cultural identity of the South: rural life described through the relationship with the soil and the animals, the religious traditions, the ancient cult of ancestor worship, the carnival, social exclusion and degradation of the urban poor, the miners’ life, unemployment and the battle for work, the children – the true soul of the South – the ingenious objects of popular culture, the issue of organized crime, which causes so much suffering and outrage to the people of these parts, the sea and the countryside, the striking beauty of an extraordinary and long-suffering land. It is an intense and multi-faceted exhibit, presenting emotions as well as information and revealing a troubling cross section of the social and ethno-anthropological scenario in an important part of Italy.

In addition to the importance of the photographers and of the “question of the South” itself, a key issue in the past and still a thorn in the country’s side today, the topic was chosen also because of its relevance to the town of Cinisello Balsamo, which houses the Museum of Contemporary Photography. It is common knowledge that Cinisello Balsamo, a suburb of Milan that was heavily industrialized during the country’s “boom” years, is largely populated by immigrants. From scarcely 15 thousand in the early fifties, the town’s population shot up to over 80 thousand in the seventies, thanks to a mass migration of workers from the South, who formed the workforce of the large factories north of Milan, providing the manpower that drove the economic production of that vast area, and to a large extent of the entire country.

CONTENTS OF THE EXHIBIT

The 120 black and white photographs taken by the 15 photographers that we selected from the Museum’s collections are all silver bromide gel prints. They are displayed in the two exhibition galleries, mounted in mat board and white frames, in their original formats. The images make us reflect on important, serious questions concerning the culture and society of the South of Italy. The following is a list of the photographers and the photographic archives their work was drawn from: Letizia Battaglia, Antonio Biasiucci, Carmelo Bongiorno, Mario Cresci, Luciano D’Alessandro, Mimmo Jodice, Lello Mazzacane, Carmelo Nicosia, Tino Petrelli, Francesco Radino, Marialba Russo, Ferdinando Scianna (Lanfranco Colombo/Lombardy Region archives), Mario Cattaneo (Mario Cattaneo archives) Federico Patellani (Federico Patellari/Lombardy Region archives), and Uliano Lucas (Grazia Neri archives).

The 120 color images, by 34 different authors, were taken from 24×36 slides. They are part of the ample Grazia Neri archives, which include images taken by a multitude of photographers for the famous agency on a wide range of topics: news, politics, social customs, culture, science and the environment.

We thought it interesting to select a series of brightly colored iconic images of the tourist’s imaginary South, in the form of small prints in colorful frames. These are displayed on the walls of various areas in the Museum, from the atrium to the corridors and stairwells, as well as the exhibit areas. Like little souvenirs, they serve as a happy reminder us of the beauty, traditions, tastes and aromas of the South.

The video interviews with residents of Cinisello Balsamo create a direct link with the many people who left their place of origin and now live in a very different place. They tell us their stories, memories, thoughts and wisdom. Their openness in recounting their experiences has contributed to the creation of an important part of the exhibit.