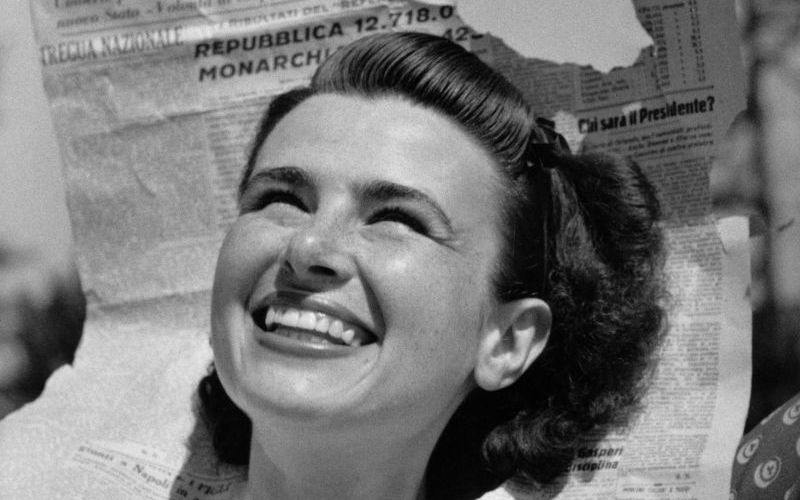 Federico Patellani is one of the great masters of Italian photojournalism. A cultured and sensitive narrator, he photographed the destruction caused by the bombing campaigns, the start of the reconstruction and the country’s first steps forward up to the referendum that saw the Republic come about, and with it modern Italy.

Patellani’s photo reportage is rigorous, without rhetoric, instead taking care to render the essential elements of the narration for the observer, according to a style that in 1943 he himself defined as that of a “new formula journalist”: clarity, communicativeness, rapidity, a taste for framing the shot, exclusion of clichés, so the images “appear to be alive, current, pulsating, like the frames of a film usually are”.

In this historical context, the Constitutional Referendum and the election of the Constituent Assembly, which was to write the new institutional charter, take on major importance and also considerable symbolic power. This exhibition is intended to offer an opportunity to get to know and reflect on a crucial period in the history of 20th-century in Italy.

On 2 June, a day of very fine weather, the Italians went to cast their votes with enthusiasm after twenty years of dictatorship and the turnout at the urns was very high indeed: 89.1%, amounting to 24,947,187 people, 12,998,131 of whom women, who had been called upon to vote for the first time in the history of Italy. The result was 12,717,923 votes for the Republic and 10,719,284 for the Monarchy, with spoiled ballot papers accounting for around 2 million votes.
The Italian Republic was proclaimed on 18 June 1946. The Monarchy had died and the Republic was born. Italian society and politics were embarking on the long and exhausting task of building democracy.

Federico Patellani was born on 1 December 1911 in Monza. A graduate in law, an art enthusiast, he began photography in 1935, when, as an officer in the Engineer Corps, he participated in the Italian army’s operations in East Africa. In June 1939, on his return from Africa, he began a long collaboration with the magazine “Tempo”, edited by Alberto Mondadori. Patellani’s photo reportages profoundly marked the magazine’s style: his “fototesti” [literally “phototexts”], extensive photo features accompanied by long captions written by the man himself, are considered in historical terms as an innovative way of engaging in photojournalism.
As a correspondent in Russia, Patellani reported on the war on the Eastern Front, signing his reports with the pseudonym Pat Monterosso. Among other reports, he also produced an important series of images of the bombing of Milan in August 1943. After two years of internment in Switzerland, on his return to Milan he contributed to “Corriere Lombardo” for a year or so, to then take up his post again in the editorial office of “Tempo”, which resumed publication in 1946 under the editorship of Arturo Tofanelli. He worked exclusively with the weekly magazine until 1952, when he decided to go freelance.
From the ancient European universities to recently independent African states, from South America to the islands of the South Seas, from Africa to Amazonia, from the islands of pirates to those of the great travel writers, Patellani journeyed around the world several times making reports employing a sober photojournalism that makes no concessions to folklore. His last report was on Ceylon in 1976. He passed away on 10 February 1977 in Milan.