Federica Bardelli and Alex Piacentini use the images recorded by the webcams coming from the Mediterranean coasts for their project. They recreate through these images a long horizon which moves clockwise, from Gibraltar to Morocco.

The technique used to realize each individual image is the split-scan, which makes simultaneously visible, side by side in the frame, the successive instants recorded by the webcam, thus converting time into space. The combination of all frames generates in this way a complete record which, after about an hour, reaches the starting point again, like a radar that periodically scans the horizon.

The work consists of two opposing and complementary dimensions. The aesthetic appeal of the individual images containing casual micro everyday stories which take place in the short scan time and the evidence of a monitoring and broadcasting mechanism, a kind of panopticon, constituted by the technological apparatus of the project, in which the logics of tourism and surveillance, of desire and fear, meet and overlap. 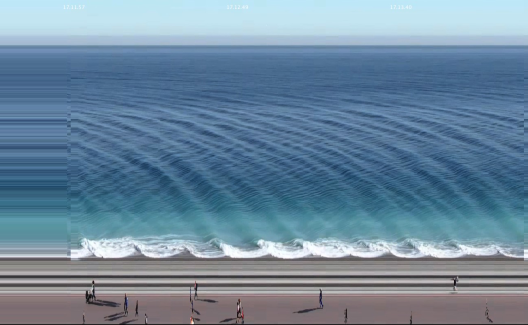 State of emergency is an environmental installation which comes from the artist’s reflection about an evocative material of our times: the emergency thermal blanket, the silver and gold film given as a first aid tool to migrants arriving to the Italian and European coasts of the Mediterranean.

A simple context change of an effective everyday object amplifies its symbolic meaning so as to replace one of the symbols par excellence, the flag. Thus, the “emergency” – in the double sense of “condition” and “nation” – claims, constitutes and implies, even before a denunciation, an assumption of responsibility by citizens and the institutions representing them considering the political and social change which affects the European Union.

During the residency the flag was hoisted on the flagpole of Palazzo delle Aquile, the municipal building of Palermo, and accompanied with a letter by the mayor of the city, Leoluca Orlando, addressed to the high representatives of the European Parliament and Commission. 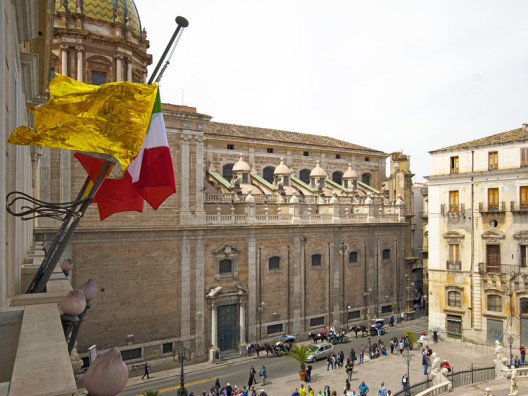 Humanae is an ongoing project by the Spanish-Brazilian artist Angélica Dass, who intends to create a catalogue of the different skin colours. This taxonomy of Borgian proportions adopts the codes of the PANTONE guide, whose range of colours invites viewers to reflect on the ambiguity of the word “identity”, when it is used in the sense of equality.

Angélica Dass triggers this semantic mechanism by moving “innocently” the race problem from a socio-political context to an apparently neutral medium such as a colour catalogue, in which the primary colours have exactly the same importance as the hybridized ones and every correspondence between simplification of the racial stereotype and the “real” skin colour gets lost.

During the residency, Humanae was continued in the town of Vita. Thanks to the collaboration with the Pro Loco the artist lived for a long time with the inhabitants and was able to establish a deep relationship, which has been necessary for the realization of portraits ranging from 8-month-old children to 80-year-old people. As usual, the photographs realized in Vita and Gibellina are exhibited and shuffled with the work done by the artist in the world.

Sicily is one of the main destinations of the immigration phenomenon in the Mediterranean. Civil wars and the unsustainability of political and economic conditions are forcing the inhabitants of African countries and of the Middle East to flee their homes leaving everything behind except their identity.

The project by Simone Sapienza is inspired to the manual that the US Army distributed to 450.000 men who were involved in the so-called Operation Husky and landed in Sicily in July 1943 to contribute to the liberation from fascism. These guides include information of various kind: geography and morphology of the region, statistics on major cities, information on transport and energy networks, but they also describe customs and habits of the population, offering an exotic and stereotypical image of Sicily.

The guide, illustrated with photographs by Simone Sapienza, has been redesigned by him for today’s refugees and if it is intended, on the one hand, even symbolically, as a help and reception tool for migrants, on the other hand, it is addressed to residents and critically measures the economic, social and cultural changes occurred in the last 70 years.

The project by Zamir Suleymanov deals with the concept of identity starting from one of its most direct and official applications, i.e. the photographic images contained in documents, whose continuous multiplication and duplication, as a result of the control obsession of public bureaucracies, actually cause their dematerialisation as well as disappearance.

The artist selects one of the most variable elements and which is, therefore, most linked to the expression of identity in some portraits contained in ID documents, which have been photocopied many times: moustache, considered in his country as a symbol of power and male supremacy, like in many cultures of the Mediterranean. Cropped, taken from the original context and presented in a white space, moustaches become abstract images, which can seem like islands.

We can therefore consider these images as real yet unknown islands, located along the coasts of the Mediterranean or the Caspian Sea, where the artist comes from. Or they might be artificial islands projects and platforms, technological installations to ensure the flow of gas and oil from the Caucasus and the Middle East. Or they might be considered as imaginary places, in a more utopian and poetic dimension.

Stratis Vogiatzis intends to continue his own research and to further deepen his work on the individual identity of migrants, refusing the forced mass categorization imposed by media due to the boundlessness and urgency of the phenomenon.

Through the combined use of multiple media – in this case mainly photographic images and written words, but also videos and other objects – the artist emphasizes the uniqueness of the human being, his personality and his individual history, seeking a direct, empathetic relationship both with the author and the audience.

The project created during the residency takes shape on the island of Lampedusa and the island of Chios, where the artist comes from. Portraits and collected materials reinforce a symbolic – as well as existential – link between the two countries and between two realities which dramatically appear on newspapers on a daily basis.