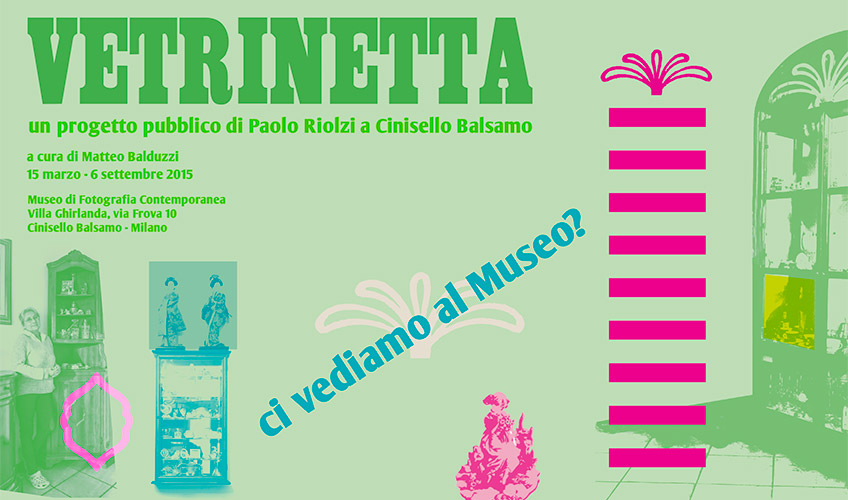 Vetrinetta is a public art project ideated by Paolo Riolzi, commissioned by the Museum of Contemporary Photography and funded by the Cariplo Foundation in the context of the “Citizens as Cultural Protagonists” project.

The project is based on a specific item of furniture – the vetrinetta or étagère – which collects, holds and displays in homes cherished personal or familial objects belonging to the household, thereby tracing a fascinating biography of memories and desires. Considered as a whole, these display cases constitute an authentic social landscape formed of infinite micro-stories of the quotidian, winding up by composing a photograph-world of collective identity.

With irony, curiosity and affection, Vetrinetta undertakes a lengthy journey into the social weave of the city of Cinisello Balsamo and not that alone, working within the dialectic between public and private, between personal history and collective identity, using different devices to reactivate dialogue between people and between generations.

The project is divided into several types of work, performed thanks to the involvement of a group of young people in the community:

– a census of the display cases, to construct an archive that can be consulted in the display area and online, destined to grow for the duration of the project;

– a number of biographical interviews conducted by young researchers guided by sociologist Paolo Volontè, which examine in depth the personal histories of participants through the memories, anecdotes and feelings tied to the objects contained in the display cases;

– a public display in the form of a collective étagère, set up near the museum in the north wing of Villa Ghirlanda, home to the Civic Music School, where anyone can bring a personal object and thus contribute to a choral recounting of the city;

– a number of coffee get-togethers in the homes of participants, enabling inhabitants and museum visitors to informally meet and talk;

– a publication that will be presented in June 2015 and is configured as a history of the community told through the display cases in the homes of, and the stories recounted by, inhabitants.

The exhibit offers the public the works of Paolo Riolzi, photographs in 1:1 scale of some of the showcases and an architectonic structure containing the constantly updated archive, designed by the Viaindustriae collective.

Supported by Fondazione Cariplo, in collaboration with Marse association and Municipality of Cinisello Balsamo.